The book of Job has long been used as a book to try to explain the problem of why bad things happen to good people or why evil exists, etc.  The story begins with the telling of a “bet” between God and Satan about a man named Job.  Job was by all accounts in the story, a faithful man.  The bet between God and Satan was that, if all the blessings of his life were taken away, then Job would ultimately curse God instead of continuing to bless.  As the first two and a half chapters go along, Job’s children, health, and wealth are 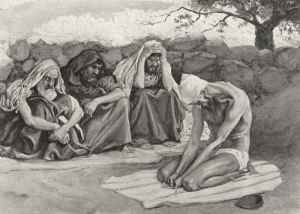 all taken from him.  When we come to Job 2:11ff, we are introduced to three friends of Job – Eliphaz, Bildad, and Zophar.

Now when Job’s three friends heard of all these troubles that had come upon him, each of them set out from his home—Eliphaz the Temanite, Bildad the Shuhite, and Zophar the Naamathite. They met together to go and console and comfort him. When they saw him from a distance, they did not recognize him, and they raised their voices and wept aloud; they tore their robes and threw dust in the air upon their heads. They sat with him on the ground seven days and seven nights, and no one spoke a word to him, for they saw that his suffering was very great.

There’s a big part of me that wishes Job would have wrapped up at this point because the more the friends talk after these seven days and seven nights (most of the rest of the book is the conversation between the four of them), the more they end up blaming Job for what has happened.  I have found in difficult circumstances in my life and also as I have been the one coming to one who is hurting that simply being silent and mourning and grieving with another is often the best thing to do.  Words often get in the way.

I find myself in that place today as I grieve the news about one of my dear friends.  I graduated with Jeff from seminary in 1999 and he has been a member of a group of pastors I gather with once a year primarily for prayer, nurture, and support.  In August of 2007, his 2 year old son Ben was diagnosed with a rare form of cancer called neuroblastoma.  Over the last year and a half, we have journeyed with Jeff, Carin, Ben, and their son Ryan (born about a year ago) as they have fought this cancer in seemingly every way possible.  Our group gathered in Seattle last year and spent time at their house and had time to pray for and with Jeff and his family.  We were blessed as Ben proudly showed off his collection of Lighting McQueen toys that he has received throughout the course of his treatment.  We laughed as we watched the Cars outtakes with Ben on the Cars DVD.  After Carin took Ben up for a nap, we had time with Jeff and we cried with him as he shared about this experience.

It was heartbreaking to receive the news last night that, after Ben’s most recent course of treatment, his scans showed that the cancer has metastasized into his brain and into his liver.  Jeff and Carin have been sharing their experience on their blog.  I read the news last night and simply broke down because there is no rhyme or reason to this thing that has come into their lives and shattered their hopes and dreams.  I spent time in prayer next to my youngest child’s bed last night not saying anything because there are no words.

There are obviously words for a miracle of healing to take place.  There are obviously prayers about God’s presence and peace with them all.  There are obviously prayers for so many things here.  But all I could do last night was sit next to my little three year old boy and simply sit in silence and try to understand.  One of my fellow covenant group members posted about Ben back in August of 07 and put in the words from a Rich Mullins song about prayer, called Hard to Get.  They don’t explain this nor do they make it feel any better, but they do express some of the laments going up.

Do you remember when You lived down here where we all scrape
To find the faith to ask for daily bread
Did You forget about us after You had flown away
Well I memorized every word You said
Still I’m so scared, I’m holding my breath
While You’re up there just playing hard to get

Did You ever know loneliness
Did You ever know need
Do You remember just how long a night can get?
When You were barely holding on
And Your friends fall asleep
And don’t see the blood that’s running in Your sweat
Will those who mourn be left uncomforted
While You’re up there just playing hard to get?

And I know that I am only lashing out
At the One who loves me most
And after I figured this, somehow
All I really need to know

Is if You who live in eternity
Hear the prayers of those of us who live in time
We can’t see what’s ahead
And we can not get free of what we’ve left behind
I’m reeling from these voices that keep screaming in my ears
All the words of shame and doubt, blame and regret

And while they are many miles away, I sit with Jeff, Carin, Ben, and Ryan in silence as Job’s friends did.  I grieve with them and then sit on the ground in silence for there are no words.